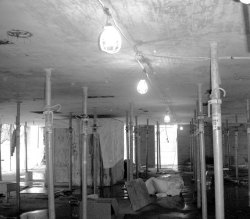 Many construction sites are illuminated 24/7 with strings of incandescent lamps. On this New York City job, compact fluorescents were used instead, saving energy and labor.

On a Renzo Piano-designed renovation and expansion for Harvard Art Museums, the University and the general contractor, Skanska USA, paid attention to something that all too often gets ignored, even on green projects: inefficient jobsite lighting. By replacing the typical incandescent light strings and metal halide lamps with a new low-voltage LED system from Clear-Vu, they expect to reduce lighting energy use by nearly 90%, saving $350,000 in electricity costs during the period of construction.

Energy is not the only savings opportunity: on a large construction job, it’s not unusual to have one or more licensed electricians doing nothing but changing light bulbs all day, every day. For this Harvard job the electrical contractor was able to reduce its budget for maintaining the jobsite lighting, translating into additional savings for the University, according to Paul Davey, MEP manager for Skanska.

With its strong commitment to green building, Harvard was receptive when Skanska proposed using this new technology. The University invested about $200,000 in the Flex SLS system from Clear-Vu for a package that includes remote LED drivers connected to low-voltage wiring runs supporting a total of 780 LED fixtures. The drivers have built-in scheduled dimming, a feature that Skanska requested specifically for this project.

Conventional jobsite lighting costs just a fraction of that $200,000, but it comes with other expenses—most notably the cost of temporary electrical service to each floor with enough juice to power all those inefficient fixtures. Davey estimates that they have been able to cut the size of temporary power panels and distribution boxes in half with the use of the LEDs, offsetting a portion of the system’s cost. The electrical demand doesn’t drop as much as the safety lighting load, because there are many other uses of that power—primarily for tools, equipment, and task lighting.

On any job in the United States the Occupational Health and Safety Administration (OSHA) requires at least five foot-candles on the floor throughout the entire building when work is going on, and in most places emergency egress codes require that stairwells and corridors be illuminated even during off hours. Insurance rates are better if the entire job stays lit up at night, and no one wants to go around shutting down certain circuits at the end of each day—so all the lights typically stay on.

Meeting the OSHA regulations typically requires strings with 100-watt incandescent lamps every ten feet or 400-watt metal halide lamps on 30-foot centers. Those strings can be replaced, according to Clear-Vu’s Daniel Lax, with Flex SLS fixtures every 17 feet, so total power draw for a 100-foot corridor goes from 1,000 watts to less than 200. To replace each metal halide takes three SLS fixtures, or about 100 watts. Having the LED driver separate from the fixtures solves one of the challenges with LEDs, which is dissipating heat away from the diodes themselves. The low-voltage wiring also makes for a safer job site, according to Lax, and the fixtures clip on and off for easy relocation.