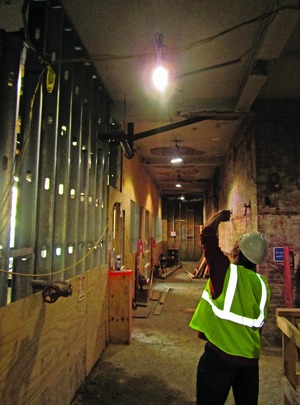 The MEP manager on a Skanska site in Boston dropped plans for conventional lights and went to LEDs. He sees big benefits and no downsides. (Photo courtesy of Skanska)

“We have learned people really need to play with it and test if for awhile before they believe you,” says Daniel Lax, the 31-year-old vice president of business development for a division of his family’s plastic injection molding company. In 2008, he branched out from making CD cases and LED pedestrian signals to developing his own brand of bright jobsite LED lamps.

Now, Lax’s need for so much patience, at least, may be near an end. His company, Clear-Vu Lighting, Westbury, N.Y., landed two significant sales in October, with big implications for the future.

The New York City Transit Authority, together with the city’s Power Authority, have moved from a test of 24 light banks designed to take power off the 600-volt DC current in the subway’s third rail, to an order for 500 units—and as many as 3,500 more—to illuminate worksites in tunnels.

“We were actually putting up conventional lighting, and we stopped,” says Davey. “It’s tremendous. Here in the Northeast, electrical contractors are old school and not too receptive to change, but the guys love these things. It’s awesome because of the simplicity of installation—and no maintenance! People always look for negatives, but you can’t really find them.”

Davey gives Lax high marks for good design and responsive product development, as does Nieresta Nelson, the NYCTA’s administration manager. For more than a decade, Nelson has worked on subway worksite lighting problems, which may get a lot worse if a federal ban goes into effect next year to phase out the manufacturing of incandescent bulbs.

“We have been testing since last year, and we are pleased with what we saw,” says Nelson. She says 500 units will give NYCTA enough to illuminate large sites and check the behavior of the devices in quantity.

Nelson says the NYCTA canvassed the LED industry for suppliers. Clear-Vu was able not only to solve technical problems others could not—such as the heat issues involved in stepping down the DC power to 24 volts from 600 volts—but also anticipated them before they sat down to discuss the project. “We did not get back any other responses, especially for this kind of worksite,” Nelson says.

While pleased with the transit sale, Lax is really excited about breaking into a much larger market by lighting what he thinks is the first fully LED-lit jobsite in the country. On Nov. 2, he shipped the last 376 units for the 791-unit installation.

Davey says the advantages of the LEDs were an easy sale to the owner, who, after the job is complete, will keep half the units lighting mechanical and interstitial spaces.

Lax says the hardware costs three to four times more than an incandescent, compact fluorescent or metal halide system, but LEDs can replace them all, they are rugged, low voltage, low heat, and they require no maintenance.

Energy savings is the real boon. Light pollution and energy consumption are reduced when strings of 100-watt incandescent bulbs, 10 ft on center and mixed with 400-watt metal halide lamps for larger spaces, are converted to 40-watt bulbs, 15 ft on center and programmed to switch to 8 watts at night. Over a two-year period, conventional lights are projected to cost $395,000, while LED is valued at $45,000.